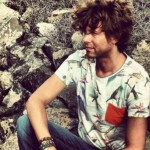 I was born on a cold winter day, in a beautiful southern city in The Netherlands, called Breda. Later I moved to some other places close to Breda, but at the age of 20 I moved back to Breda and I’m still living here.

At a very young age I was already interested in music but also in writing stories and creating things. It all started with writing little, funny stories or poems to make people laugh. Unfortunately I don’t have much of these stories anymore, because I gave them all away as presents back in the day. I remember my own Christmas story which was hilarious and where people were still talking about many years later. But I also remember a poem I send to a dutch newspaper, and they published it and called me a professional writer at the age of 9.

When I was about 10 years old we got an old piano. I started to play songs from the radio and started writing my own songs. I am a big fan of Prince and one of the first songs I learn to play myself on the piano was “Purple Rain”.

In my early twenties I met Isabelle Mangine, still one of my closest friends and we started to write songs together. I composed and played the music and she wrote and sung her beautiful lyrics. This was a very creative and productive time together. Late nineteens we recorded “Pure Energy” and “Friends” in a studio together. “Friends” was about our close friendship and still is one of my favourite songs we wrote together:

For years I didn’t do anything with music or with my creative talents. I had some regular jobs but I always felt that something was missing in my life. One day I couldn’t take it anymore and so I had to quit my job. I had these dreams for years about writing my own music and give professional gigs. I never had enough selfesteem to take this step before, but now my heart said it was the right time.

Beams of a Rainbow: Following my Heart This was the best choice I made in years! I started recording lots of music and started to give piano gigs which made me feel alive and very happy. I recorded my first album “Everything” with some professionals (the producers from Caro Emerald) and some very talented musicians (Ana Patan, she is a very talented guitarist, singer/songwriter from Germany and Bianca Jonkers, who is a professional flautist). My sister Maaike Boot (Little Smilemakers) made some beautiful artwork and a CD booklet for this release. I got some very positive reviews about my first album from all over the world, and they praised me a lot for my musical diversity.

(Beams of a Rainbow – demo version)

In 2009 I met Kitty Valk, a very talented actress and singer who also lives in Breda and we recorded a lot of beautiful Dutch poetic songs together. Kitty wrote the lyrics and I wrote the music for these songs. This project was called “Zielenzucht”. We did a lot of great gigs together and we keep doing this… it’s a lot of fun together! So… we became close friends. 🙂

In 2010 I was asked to write a Soundtrack for a theater project called “New Energy Movers”, a special project about personal growth. I created a mix of Chillout, Ambient, World Music and… lots of piano melodies, like the track “Universe of Peace”. In 2012 I met Sandra Reemer, who is a famous Dutch singer and tv presenter. We became close friends and started working together on “De Muzikale Beleving”, an exclusive reading with music. Sandra was giving these readings and I supported her musically. It was a lot of fun to do this together and I learnt a lot in this period, because Sandra was giving me a lot of personal support, I was growing stronger personally. And I am still very thankful for that! In 2014 Sandra Reemer released a limited CD single: Ave Maria (Bach Gounod), which included an excellent guitar version played by Roel Jongenelen and a piano version by me. Again my sister Maaike Boot (Little Smilemakers) made some beautiful artwork for this release, and also for my New Age single “The Guardian Angel”, which I released in that same period. In 2015 I released the instrumental album “Junk DNA” where you can hear his beautiful guitar play on the funky tracks “Gugu Beats”, “Before the Fall”, “Funky Ship” and on the bluesy track “Crossroads”. We are still recording new tracks together and I hope to release some of them in the near future.

On Junk DNA you find also some New Age, Chillout piano tracks: “Vortex” and “The Healing Garden”. I got so much positive feedback all these years on my relaxing piano tracks, that I have decided to follow this musical path now: creating more music in this genre. So I released a Chillout remix of the “The Healing Garden” as a new single in the spring last year and in juni 2016 I released the single “Es Vedra”after my visit on this magical, energetic place in Ibiza. My dream is to go back to Ibiza and doing some live gigs there!

For now I am working on a new piano Chillout – Ambient – Lounge album… so stay tuned!

Reading these words above and listening to my music you have become a part of my musical journey. Thank you so much for that… I appreciate it a lot!

But I feel that it’s unfair that you know more about me now than I know about you. It would be great if you would like to share your story or dreams with me: you can write something personal below this page, write a private message on social media or send me an e-mail.

It’s because I believe that when people supporting dreams of each other they will become reality much faster! Thank you very much for your time and support!